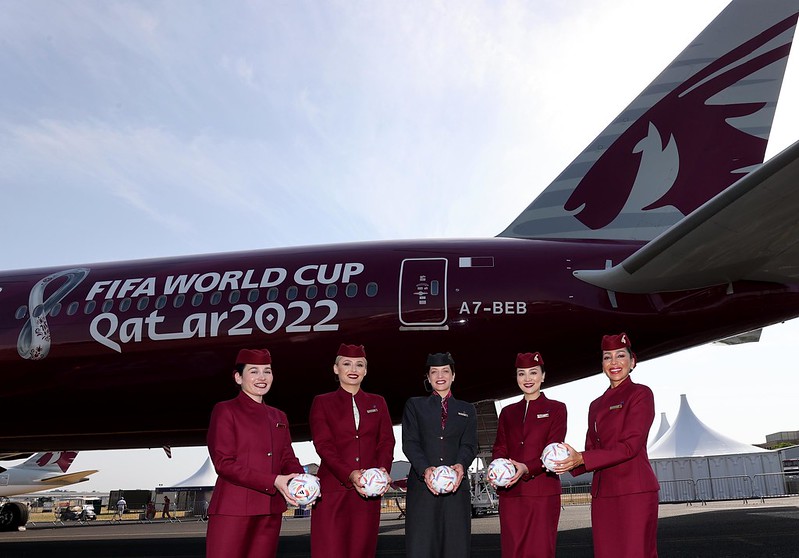 Qatar Airways, Official Partner and the Official Airline of FIFA, is showcasing a specially-branded Boeing 777 aircraft painted in FIFA World Cup Qatar 2022™ livery, at Farnborough International Airshow 2022. The airline has delighted thousands of attendees by offering tours onboard the state-of-the-art aircraft, equipped with the World’s Best Business Class, Qsuite.

The bespoke aircraft, which features distinctive FIFA World Cup Qatar 2022™ branding, was hand-painted to commemorate the airline’s partnership with FIFA and was first revealed in November 2020 to mark two years to go until the mega tournament.

Qatar Airways Group Chief Executive, His Excellency Mr. Akbar Al Baker, said: “On our road to 2022, seeing the FIFA World Cup Qatar 2022™ brand an entire aircraft and display it at such a prestigious event, is an exciting moment for everyone involved in delivering this historic tournament. Qatar’s readiness to host FIFA World Cup Qatar 2022™ is evident to all around us here in Farnborough. We hope to see many of those attending the airshow take advantage of the incredible packages Qatar Airways is offering to transport fans to the biggest tournament in the World.”

Fans that have so far missed out on securing their place at world football’s biggest event can now make their FIFA World Cup Qatar 2022™ dreams a reality by securing their official travel packages to follow any of the 32 qualified teams live across all stages of the tournament. In a few easy steps, they can purchase match tickets, flights, and accommodation through a single dedicated platform by heading to qatarairways.com/FIFA2022.

The tournament will be held across eight world-class stadiums designed to invoke the symbols of Arabian culture. The Al Bayt Stadium will host the opening game with a capacity of 60,000 seats, while Lusail Stadium is set to host the final match of the tournament, with a capacity of 80,000 seats. The remaining stadiums, which include Ahmad Bin Ali Stadium, Al Janoub Stadium, Khalifa International Stadium, Education City Stadium, Stadium 974 and Al Thumama Stadium, will house 40,000 spectators.

In its goal to bring communities together through sport, Qatar Airways has cultivated an extensive global sports partnership portfolio that includes football-governing bodies such as CONMEBOL and CONCACAF. The airline also sponsors some of the world’s biggest football clubs including Paris Saint-Germain and FC Bayern München, and additional partnerships across multiple sports disciplines such as equestrianism, kitesurfing, padel and tennis.

Qatar Airways is attending Farnborough Airshow for the first time in two years, since COVID forced its cancellation. The airline is also showcasing its spectacular Boeing 787-9 Dreamliner and luxury Gulfstream G650ER at the airshow.